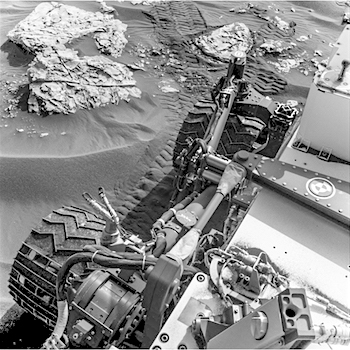 Sol 1736-39, June 23, 2017, update by MSL scientists Michael Battalio and Mark Salvatore: Curiosity has presented us with another beautiful workspace following a 16.6 meter drive.  The majority of this week’s activities were focused on imaging Vera Rubin Ridge to observe its stratigraphic and structural relationship to the underlying Murray formation.  This weekend’s plan is a bit of a deviation from that, as we will be making numerous measurements of the local Murray formation.  These “local” observations will be extremely valuable over the coming weeks, as Curiosity potentially transitions between two different geologic units (the Murray formation and Vera Rubin Ridge).  The nature of this transition will hold important clues into the origin of the ridge and the evolution of Gale Crater as a whole.

Curiosity will first use ChemCam to probe the composition of three rocky targets, followed by acquiring high-resolution Mastcam images to document the targets.  The first target, known as “Winter Harbor,” is situated in front of the rover.  This target is a benign, flat, and finely layered piece of the Murray formation. Next, ChemCam will target “Beaver Dam Pond,” which appears to be a block of the Murray formation that… [More at link]