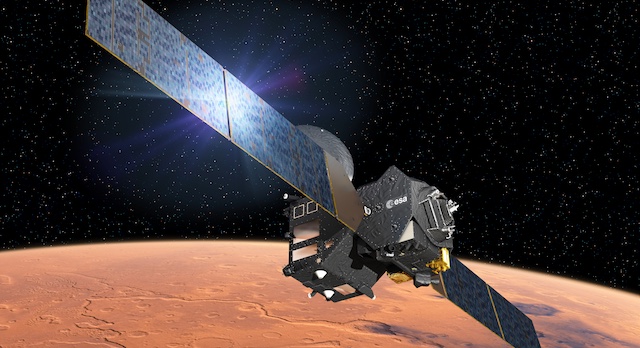 On 25 June, the Trace Gas Orbiter (TGO) will suspend its aerobraking campaign until the end of August due to Mars’ conjunction with the Sun.

With Mars behind the Sun, TGO’s communication with Earth will be difficult, and so the spacecraft orbit will be raised safely out of the atmosphere. The orbiter is now on an aerobraking campaign, exploiting the resistance of the Martian atmosphere on the spacecraft to slow itself down and lower its orbit with minimal fuel consumption.

(…) The Martian atmosphere is highly variable and this variability makes it impossible to plan ahead for more than a handful of orbits; so, during the conjunction period, the spacecraft is being taken out of aerobraking and placed into a safe orbit where the atmosphere won’t disturb it. TGO’s descent will resume after the end of conjunction…. [More at link]