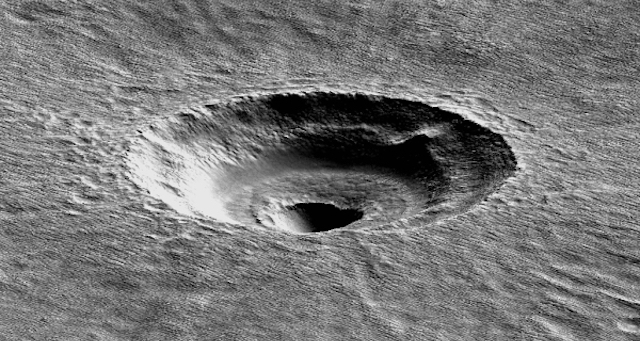 Planetary Geomorphology Image of the Month, June 30, 2017: A.M. Branson (University of Arizona). When an object impacts into layered material, it can form a crater with terraces in the crater’s walls at the layer boundaries, rather than the simple bowl-shape that is expected. The shock wave generated by the impact can more easily move the weaker material and so the crater is essentially wider in that layer, and smaller in the underlying stronger material. From overhead, these concentric terraces give the appearance of a bullseye.

Craters with this morphology were noticed on the moon back in the 1960s with the terracing attributed to a surface regolith layer. More recently, numerous terraced craters have been found across a region of Mars called Arcadia Planitia that we think is due to a widespread buried ice sheet…. [More at link]