Curiosity update: Kicking up some sand 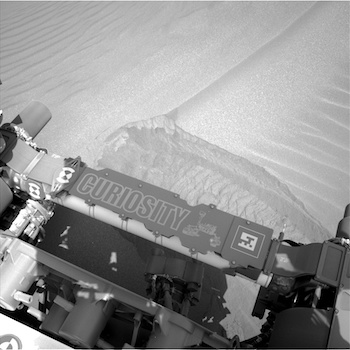 Sol 1748-52, July 7, 2017, update by MSL scientist Michael Battalio: Curiosity has intentionally scuffed a nearby sand ripple, which has gifted the team with an exceptional view of the interior of these small sand deposits. The majority of the weekend’s activities will consist of lots of targeted science on the scuff, as there is no nearby bedrock for Curiosity to observe. This is in contrast to the past week where quick documentation of local changes in stratigraphy of the bedrock as we drive closer to Vera Rubin Ridge was the priority.