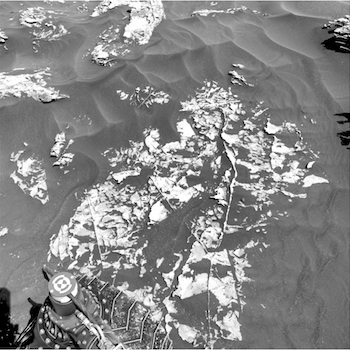 Sol 1754, July 12, 2017, update by MSL scientist Abigail Fraeman: Today on Mars we planned a typical “drive sol” that involved a bit of pre-drive science followed by a drive and some post-drive untargeted observations. There were a variety of light and dark colored veins near the rover that were visible in the Navcam images, so the science team decided to spend our pre-drive science time investigating the chemistry and morphology of these features. The coordinated ChemCam and Mastcam observations we planned on light and dark veins in targets named “Hockomock Bay” and “Hells Half Acre” should get the job done. We’ll also take a Mastcam-only observation of dark layers in a target named “High Sheriff.”

The next major chunk of time in Sol 1754 will be spent driving towards Vera Rubin Ridge. Today I was staffed as a surface properties scientist, which means I helped advise the rover drivers on any geologic features in the terrain that could present mobility challenges. We’ll be driving through a bunch of fractured bedrock and sandy areas as we head closer to our third official Vera Rubin Ridge approach imaging location. Because we’ve seen such spectacular sedimentary structures in our previous images of the ridge, we decided to try to get as close as possible to the vertical exposures of the lower portion of the Vera Rubin Ridge for this imaging stop – I can’t wait until we get there…. [More at link]