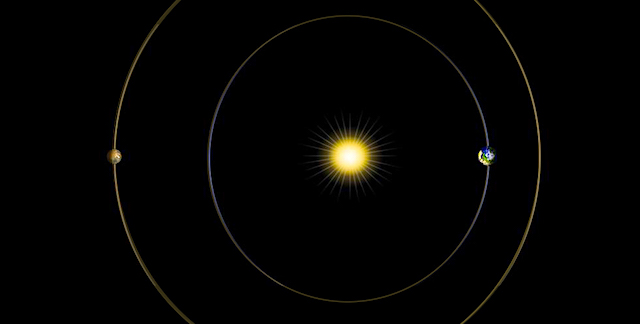 This month, movements of the planets will put Mars almost directly behind the sun, from Earth’s perspective, causing curtailed communications between Earth and Mars.

NASA will refrain from sending commands to America’s three Mars orbiters and two Mars rovers during the period from July 22 to Aug. 1.

“Out of caution, we won’t talk to our Mars assets during that period because we expect significant degradation in the communication link, and we don’t want to take a chance that one of our spacecraft would act on a corrupted command,” said Chad Edwards, manager of the Mars Relay Network Office at NASA’s Jet Propulsion Laboratory, Pasadena, California.

Data will keep coming from Mars to Earth, although loss or corruption of some bits is anticipated and the data will be retransmitted later. “We will continue to receive telemetry, so we will have information every day about the status of the vehicles,” Edwards said.

As seen from Earth, Mars periodically passes near the sun about every 26 months, an arrangement called “Mars solar conjunction.” During most solar conjunctions, including this year’s, Mars does not go directly behind the sun… [More are link]

This entry was posted in Reports and tagged solar conjunction. Bookmark the permalink.