Did a giant impact create the northern lowlands, both moons, and enrich the mantle? 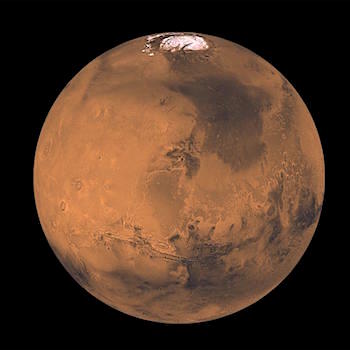 The origin and nature of Mars are mysterious. The planet has geologically distinct hemispheres with smooth lowlands in the north and cratered, high-elevation terrain in the south. The red planet also has two small oddly-shaped oblong moons and a composition that sets it apart from that of the Earth.

New research by CU Boulder professor Stephen Mojzsis outlines a likely cause for these mysterious features of Mars: a colossal impact with a large asteroid early in the planet’s history. This asteroid—about the size of Ceres, one of the largest asteroids in the solar system—smashed into Mars, ripped off a chunk of the northern hemisphere and left behind a legacy of metallic elements in the planet’s interior. The crash also created a ring of rocky debris around Mars that may have later clumped together to form its moons, Phobos and Deimos.

The study appeared online in the journal Geophysical Research Letters, a publication of the American Geophysical Union, in June.

“We showed in this paper—that from dynamics and from geochemistry—that we could explain these three unique features of Mars,” said Mojzsis, a professor in CU Boulder’s Department of Geological Sciences. “This solution is elegant, in the sense that it solves three interesting and outstanding problems about how Mars came to be.” [More at links]