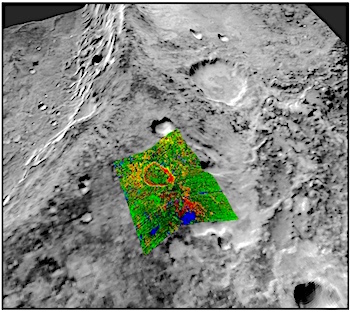 CRISM image 21BCB covers a region on the boundary of Chryse Planita, between Mawrth Vallis and Oyama crater. Chryse Planitia is a smooth circular 1600 km diameter plain that was a landing site for the U.S Viking 1 (landed July 20, 1976), and the Mars Pathfinder (landed July 4, 1997). Mawrth Vallis is an ancient Mars river channel (~15km wide) located along the crustal dichotomy boundary that exposes abundant light-toned layers of clay-rich rocks. It has been theorized that Chryse was once the site of a large body of water because many of large outflow channels and ancient river valleys, such as Mawrth Vallis, end when they reach the plain.

The image reveals detections iron-magnesium phyllosilicates (red), aluminum phyllosilicate (bright green), and alunite (blue), a type of sulfate, in the rim and ejecta of a ~9 km diameter impact crater. While alunite forms when volcanic rocks are exposed to acidic fluids, phyllosilicates are clay and clay-like minerals formed during the… [More at link]