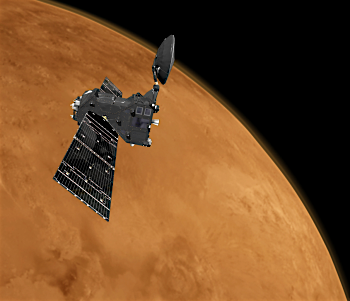 After an approximately 11-week pause due to Mars conjunction and a major software update, ESA’s ExoMars Trace Gas Orbiter (TGO) will restart its aerobraking campaign in September.

Aerobraking, you’ll recall, is the year-long campaign being conducted by TGO using the faint drag of Mars’ upper atmosphere to slow it and lower it into its final science orbit, eliminating the need for it to have carried along hundreds of kilogrammes of fuel on its journey to the Red Planet.

TGO had a summer ‘vacation’ of sorts. On 25 June, it was commanded to suspend its aerobraking campaign and raise its orbit up to a safe altitude (200 km above the surface) to wait out conjunction season .

“We used this period to close out some anomaly reports to get the spacecraft ready to support aerobraking for short orbits, later this year, as well as other technical checks and verifications,” says Spacecraft Operations Manager Peter Schmitz. [More at link]