In past decades, spacecraft have sent back huge amounts of complex data about Mars, providing a wealth of information about the planet. More than ever, the scientific community needs a way to sift through, compare, and analyse these data, prompting the development of two new tools for exploring the surface of the Red Planet: the iMars webGIS and the Planetary SUrface Portal (PSUP).

Among the many different targets for investigation in our Solar System, Mars is a special case due to the sheer volume of data we have collected from the numerous spacecraft that have flown past, orbited, landed on, or traversed the surface of the Red Planet.

Two new tools have now been developed to allow scientists to access processed data from missions including ESA’s Mars Express mission and from the ESA Planetary Science Archive. Users can browse data (high-level and raw), view image footprints, combine and compare datasets from different orbits, missions, and spacecraft instruments, hunt for signs of how the Martian surface has changed over time, and more. [More at link] 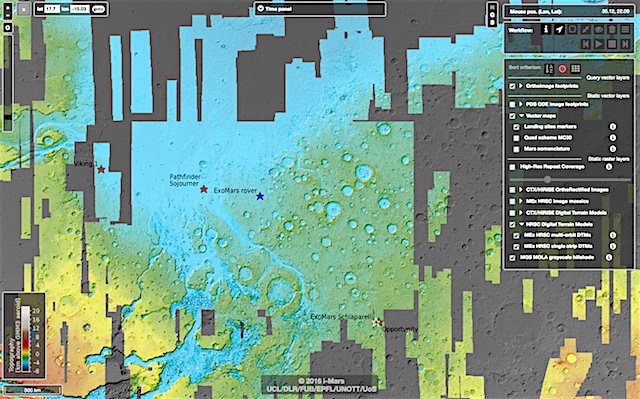