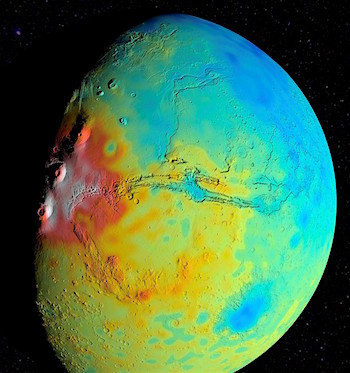 NASA scientists have found evidence that Mars’ crust is not as dense as previously thought, a clue that could help researchers better understand the Red Planet’s interior structure and evolution.

A lower density likely means that at least part of Mars’ crust is relatively porous. At this point, however, the team cannot rule out the possibility of a different mineral composition or perhaps a thinner crust.

“The crust is the end-result of everything that happened during a planet’s history, so a lower density could have important implications about Mars’ formation and evolution,” said Sander Goossens of NASA’s Goddard Space Flight Center in Greenbelt, Maryland. Goossens is the lead author of a Geophysical Research Letters paper describing the work.