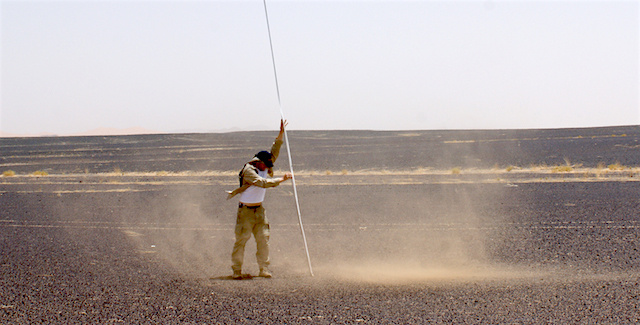 Swirling columns of sand and dust, known as dust devils, are a feature of desert areas on Mars and on Earth. Now, a study of terrestrial dust devils has shown that around two thirds of the fine particles lifted by these vortices can remain suspended in the atmosphere and be transported around the globe. The findings have implications for the climate and weather of both planets and, potentially, human health here on Earth. Results will be presented by Dr Jan Raack of the Open University at the European Planetary Science Congress (EPSC) 2017 in Riga, Latvia on Monday, 18th September 2017.

The study by Raack and an international team of collaborators gives important insights into the contribution of dust devils to mineral aerosols in planetary atmospheres. About half of the dust lifted into the martian atmosphere each year is thought to come from dust devils. However, to date, the structure of these vortices has not been well understood. As terrestrial dust devils act very similarly to those on Mars, Raack and colleagues have carried out multiple field campaigns over the past five years to study dust devils in three different deserts on Earth, in China, Morocco and the USA. The researchers took samples of grains lifted by dust devils at different heights, studied tracks left by dust devils on the surface and measured physical and meteorological properties of dust devils.

Raack explains: “The method for sampling is simple – although not actually that pleasant to carry out as it involves getting sandblasted. Essentially, we cover a 5-metre aluminium pipe with double sided sticky tape and run into an active dust devil. We hold the boom upright in the path of a dust devil and wait until the dust devil passes over the boom. Numerous grains are collected on the sticky tape, which are preserved on-site by pressing sections of the tape from different heights onto glass slides.” [More at links]

This entry was posted in Reports and tagged atmosphere, dust, dust devils. Bookmark the permalink.