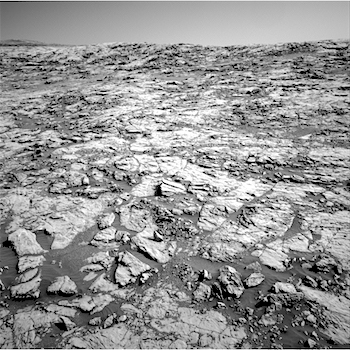 Sol 1828, September 27, 2017, update by MSL scientist Michelle Minitti: Before landing, Curiosity’s landing ellipse and the foothills of Mt. Sharp were divided up into quadrangles – squares ~1.5 km on a side – to give science team members reasonable amounts of terrain to work with during pre-landing geological mapping, and provide the source of the target names within that quadrangle. Quadrangles get their names from towns that are nearby and share names with notable regions of geological interest on Earth, and since Sol 1500, Curiosity has been traversing the “Bar Harbor” quadrangle. If today’s drive goes as planned, we will leave the Bar Harbor quadrangle behind, so today’s blog will honor the Maine heritage of our long-time home.

Curiosity spent her last sol in the Bar Harbor quadrangle “going right out straight” (working very hard). With ChemCam, she zapped “Hawk Mountain,” a rock with “savage” (great) layering, and a “whole ‘notha” (another) target, “Bonney Woods,” moving from a white vein into the surrounding bedrock. Mastcam acquired a small stereo mosaic over an area where the bedding geometry appeared particularly… [More at link]