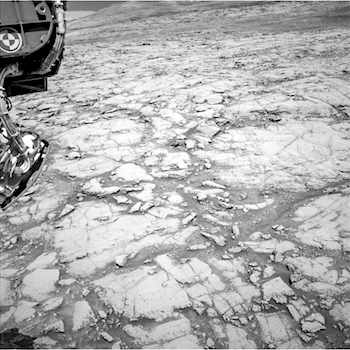 Sol 1843-44, October 16, 2017, update by MSL scientist Scott Guzewich: The seasons on Mars are long, and even though Curiosity is near the equator, the change in weather between the seasons is noticeable and winter is coming to Gale Crater. Right now it’s late fall in the southern hemisphere on Mars and the colder weather changes how we operate Curiosity. In colder weather, we need more power to heat the instruments and keep Curosity’s electronics and mechanisms warm. This reduces the amount of electricity we have to conduct science, but we were still able to prepare a full plan for the next two sols.

We identified two new bedrock targets to analyze with ChemCam (“Woodlands” and “Montecristo”, which are near the bottom portion of this image [above]). For Sol 1843, we also planned a series of Mastcam images of nearby bedrock targets that were analyzed with ChemCam as well as interesting spots in the distance, including a layered ledge on the Vera Rubin Ridge and a possibly hematite-rich patch called “Iron Mask” which we may drive near in the future. We also will drive approximately 22 m towards our next target on Sol 1843. [More at link]