How water could flow on icy early Mars 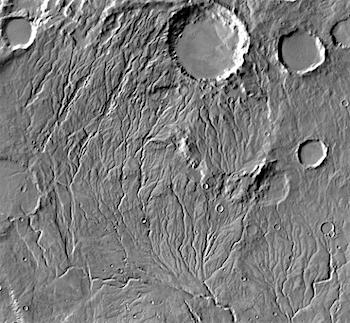 Research by planetary scientists at Brown University finds that periodic melting of ice sheets on a cold early Mars would have created enough water to carve the ancient valleys and lakebeds seen on the planet today.

For scientists trying to understand what ancient Mars might have been like, the red planet sends some mixed signals. Water-carved valleys and lakebeds leave little doubt that water once flowed on the surface. But climate models for early Mars suggest average temperatures around the globe stayed well below freezing.

A recent study led by Brown University geologists offers a potential bridge between the “warm and wet” story told by Martian geology and the “cold and icy” past suggested by atmospheric models. The study shows that it’s plausible, even if Mars was generally frozen over, that peak daily temperatures in summer might sneak above freezing just enough to cause melting at the edges of glaciers. That meltwater, produced in relatively small amounts year after year, could have been enough to carve the features observed on the planet today, the researchers conclude.

The study is published online in the journal Icarus. Ashley Palumbo, a Ph.D. student at Brown, led the work with Jim Head, a professor in Brown’s Department of Earth, Environmental and Planetary Science, and Robin Wordsworth, a professor in Harvard’s School of Engineering and Applied Sciences. [More at links]