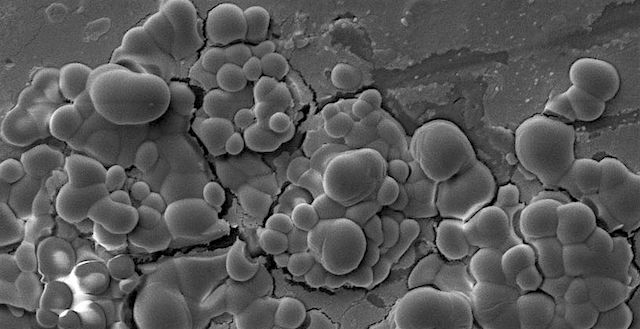 Scientists around Tetyana Milojevic from the Faculty of Chemistry at the University of Vienna are in search of unique biosignatures, which are left on synthetic extraterrestrial minerals by microbial activity. The biochemist and astrobiologist investigates these signatures at her own miniaturized “Mars farm” where she can observe interactions between the archaeon Metallosphaera sedula and Mars-like rocks. These microbes are capable of oxidizing and integrating metals into their metabolism. The original research was currently published in the journal Frontiers in Microbiology.

At the Department of Biophysical Chemistry at the University of Vienna, Tetyana Milojevic and her team have been operating a miniaturized “Mars farm” in order to simulate ancient and probably extinct microbial life – based on gases and synthetically produced Martian regolith of diverse composition. The team investigates interactions between Metallosphaera sedula, a microbe that inhabits extreme environments, and different minerals which contain nutrients in form of metals. Metallosphaera sedula is a chemolithotroph, means being capable of metabolizing inorganic substances like iron, sulphur and uranium as well.

To satisfy microbial nutritional fitness, the research team uses mineral mixtures that mimic the Martian regolith composition from different locations and historical periods of Mars: “JSC 1A” is mainly composed of palagonite – a rock that was created by lava; “P-MRS” is rich in hydrated phyllosilicates; the sulfate containing “S-MRS”, emerging from acidic times on Mars and the highly porous “MRS07/52″ that consists of silicate and iron compounds and simulates sediments of the Martian surface.

“We were able to show that due to its metal oxidizing metabolic activity, when given an access to these Martian regolith simulants, M. sedula actively colonizes them, releases soluble metal ions into the leachate solution and alters their mineral surface leaving behind specific signatures of life, a ‘fingerprint’, so to say”, explains Milojevic. The observed metabolic activity of M. sedula coupled to the release of free soluble metals can certainly pave the way to extraterrestrial biomining, a technique which extracts metals from ores, launching the biologically assisted exploitation of raw materials from asteroids, meteors and other celestial bodies… [More at links]