Curiosity update: A change of scenery 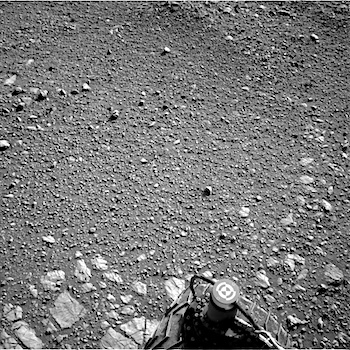 Sol 1850-51, October 18, 2017, update by MSL scientist Mark Salvatore: Since the start of our investigation of the Vera Rubin Ridge (VRR, a narrow and winding ridge that exhibits signs of oxidized iron phases from orbit), we’ve been primarily driving around on fractured bedrock material with a general lack of sand. This is unlike the landscape in the Murray formation at the base of the ridge, which was dominated by a combination of bedrock exposures and wind-mobilized sands. However, following Curiosity’s drive two days ago, the team found a local landscape dominated by small cobbles and pebbles with an abundance of fine soil surrounding these fragments. We had planned to investigate this location based on both ground- and satellite-based observations due to its different appearance relative to the rest of VRR, but this was our first up-close glimpse of this different landscape.

The science team had a few decisions to make during today’s planning session. There was time available to use the MAHLI (high-resolution imaging) and APXS (bulk chemistry) instruments located on Curiosity’s arm to investigate the surroundings, and the team was able to choose to perform either a quick “touch and go” analysis (where we are able to drive away the same day as making the measurements) or a… [More at link]