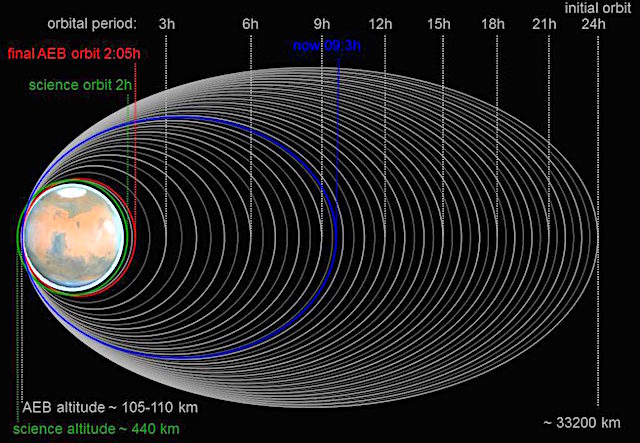 ExoMars has successfully performed a Flux Reduction Manoeuvre (FRM) for the first time. The manoeuvre was triggered by the excessive density of Mars’ atmosphere, which had slowed the spacecraft above the limit the operations team normally allows.

The manoeuvre happened on 19 September, just a month before ExoMars’ first arrival anniversary.

FRM together with the so-called ‘Popup’ manoeuvre are the spacecraft’s automatic responses meant to save it from critical conditions that could cause damage, such as excessive heat or deceleration.

They both trigger the propulsion system to bring the spacecraft out of a current (problematic) orbit into a higher orbit. The FRM raises the orbit by just a little so that aerobraking can continue with reduced drag. (…)

Unfortunately, predicting the Martian atmosphere is very complex and conditions can change significantly from one orbit to the next, hence these automatic manoeuvres are maintained on-board by the team in case the spacecraft encounters a much denser atmosphere than expected. [More at link]