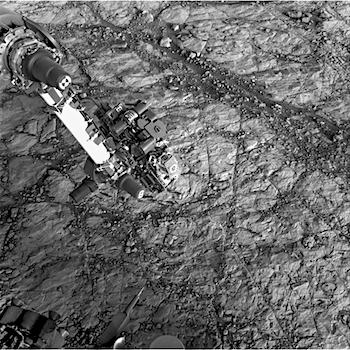 Sols 1856-57, October 25, 2017, update by MSL scientist Rachel Kronyak: After Monday’s communications hiccup (detailed here) that prevented us from uplinking our two-sol plan, today we’re hoping to redo most of what we had in Monday’s plan. This primarily includes a remote science block, during which we’ll shoot a few ChemCam targets named “Hartley,” “Hooggenoeg,” and “Beaufort” to study nearby pebbles and bedrock. We’ll also look behind us to take some Mastcam mosaics of Aeolis Palus, the Gale crater plains to the north of Mount Sharp. We’ll take some additional Mastcam images to document local bedrock features as well as the Vera Rubin Ridge terrain just in front of the rover… [More at link]