Are small martian landslides similar to large ones on Earth? 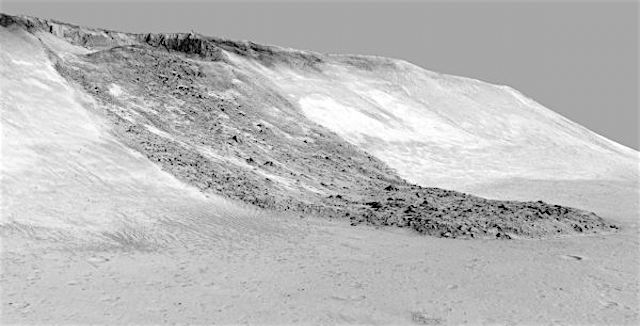 Planetary Geomorphology Image of the Month, October 31, 2017: Susan Conway and Anthony Guimpier (CNRS Laboratoire de Planétologie et Géodynamique à Nantes, France). Landslides have been documented on almost all the solid bodies of the solar system and Mars is no exception. The most famous landslides on Mars are the giant landslides in the Valles Marineris, which were discovered in the images returned by the first Mars Orbiter “Mariner 9” launched in 1971 (Lucchitta, 1979). They have volumes typically ranging from 108-1013 m3 (McEwen 1989; Quentin et al. 2004; Brunetti et al. 2014) and have been found to have occurred periodically since the canyon’s formation 3.5 billion years ago (Quantin et al. 2004). The largest size of terrestrial landslides generally only extends to 108 m3 (McEwen 1989; Quentin et al. 2004).

Image 1 shows 3D views of two landslides on Mars imaged by NASA’s Mars Reconnaissance Orbiter HiRISE camera. Their topography has been reconstructed using stereophotogrammetry – using the difference in two images taken from different angles to build a digital elevation model – a tool available for free from NASA called the Ames Stereo Pipeline. These are relatively small landslides for Mars with volumes less than 108 m3. A landslide with similar dimensions and volume on Earth is the Frank Slide in Alberta, Canada (Image 2). However, there are some interesting differences…. [More at link]