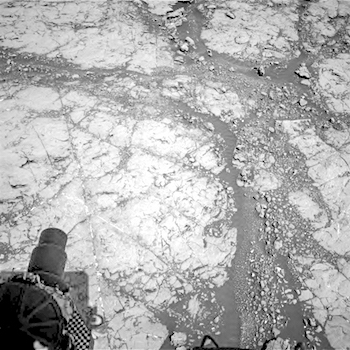 Sols 1861-61, October 30, 2017, update by MSL scientist Ryan Anderson: We are starting to suspect that Vera Rubin Ridge might be cursed. After the challenges we faced last week, we were hoping for a successful weekend plan but alas, it was not to be. Over the weekend Curiosity’s arm didn’t heat up as much as it was supposed to, so the arm activity failed and most of the weekend plan was lost. So today the name of the game is to try again!

The main activity in the 1861-1862 plan is another attempt at dropping off the “Ogunquit Beach” sample in the SAM instrument, followed by SAM Evolved Gas Analysis (EGA) of the sample. In other words, SAM will heat the sample and measure what gases are produced. On sol 1862 there will be a science block where we will try to recover some of the remote sensing that was planned for the weekend. This will begin with a Mastcam mosaic that builds upon some previous Mastcam images of “Region 7″, followed by ChemCam and Mastcam observations of the bedrock targets “Schmidtsdrif” and “Estecourt” as well as the soil target “Lisbon”. The science block will end the way it began, with another Mastcam mosaic… [More at link]