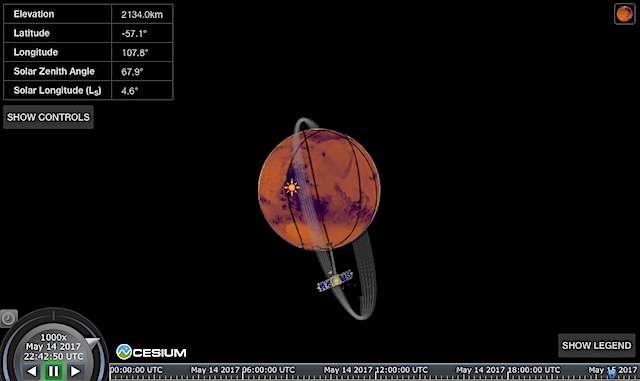 Check out this 3D viewer from the MAVEN Science Data Center at the Laboratory for Atmospheric and Space Physics. This Cesium product is a fun (and useful) visualization tool that displays MAVEN’s orbit around Mars, its orientation as it points in different directions during its orbit, and the science data it collects from the Martian atmosphere and the solar wind.

The software for this visualization tool was built and maintained by data systems personnel at the University of Colorado Boulder’s LASP, using Cesium and the open-source LaTiS tool for serving time-series data. [More at links]

This entry was posted in Reports and tagged Mars Atmosphere and Volatile EvolutioN, MAVEN, NASA, University of Colorado. Bookmark the permalink.