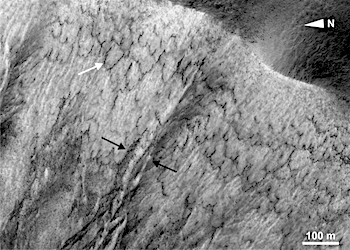 Planetary Geomorphology Image of the Month, November 30, 2017: Andreas Johnsson (University of Gothenburg, Sweden). Small-scale lobes on Mars (Fig. 1) are tens to hundreds of meters wide and consist of an arcuate frontal riser that is a meter to meters in height and a tread surface (Johnsson et al., 2012) (Fig. 2). The riser is often, but not always, outlined by clasts visible at HiRISE resolution (50-25 cm/pixel; McEwen et al., 2007). They are found on crater slopes in the martian middle and high latitudes in both hemispheres (e.g., Gallagher et al., 2011; Johnsson et al., 2012; 2017).

The martian lobes have a striking resemblance to terrestrial solifluction lobes, in both shape and size (Johnsson et al., 2012) (Fig. 2). Solifluction is a set of processes that acts on slopes in Earth’s cold regions, in regions undergoing repeated freeze-and-thaw cycles (Matsuoka, 2001). They are particularly common in permafrost regions such as Svalbard in the high Arctic, where they form within the near-surface soil layer that undergoes seasonal and/or diurnal thawing, called the active layer (Matsuoka, 2001).

Their basic requirements are frost susceptible soils and available soil moisture, which may come from either precipitation or snow melt. With the onset of the cold season the ground freezes and heave occurs due to the formation of segregation ice (ice lenses) in the active layer. This is a common phenomenon in permafrost regions and it often creates bumps in the road during winter time. On hillslopes, when the surface… [More at link]