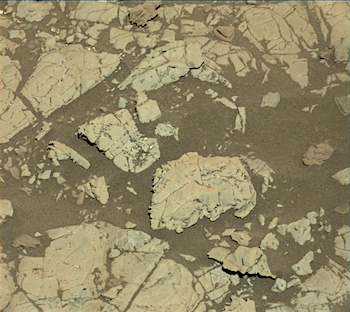 Sol 1913-24, January 2, 2018, update by MSL scientist Christopher Edwards: There’s no real rest for the rover. We planned sols 1921-1924 on December 22 and 29. Earlier, the team had planned a minimal set of activities for the rover to carry out over Sols 1913-1920, letting the science and engineering teams spend a bit of time away from work. However, this doesn’t mean Curiosity was sitting idle. There were still plenty of things to do on Mars, including some automated ChemCam AEGIS observations. These activities automatically pick out targets of interest and measure their chemistry at our current parking spot.

On New Year’s Eve, the rover started carrying out the four-sol activity plan we completed Dec. 29. This site was so interesting that we backtracked to get to where the rover was parked for this plan. In the workspace in front of the rover, we have some very peculiar targets that warranted some additional interrogation. From orbit, this location has a very interesting appearance, with bluer hues being observed in High Resolution Imaging Science Experiment camera data onboard the Mars Reconnaissance… [More at link]