Martian craters in the highlands that are wider than 10 kilometers (6 miles) often have flat, smooth, shallow floors. This fact has been noted since the first spacecraft images of Mars were taken by NASA’s Mariner 4 in 1965. Over the years, scientists have suggested variously that the cause could be windblown sediments, lakebed sediments, impact melt, or volcanism. 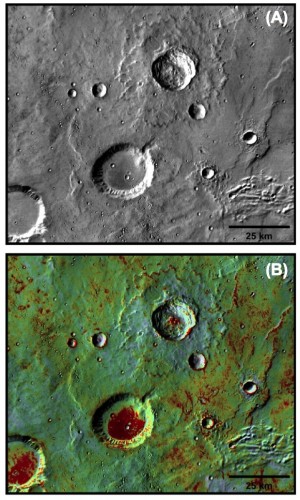 ROCK BOTTOM. Two craters, separated by billions of years in age, show telltale signs of a cooling Mars. Red colors (lower panel) show areas where exposed bedrock lies at the surface. When the ancient crater at lower center formed, mantle rock melted and flowed out to pave the crater floor. The crater at upper center is about the same size, but much younger. When it formed, Mars had cooled enough that the impact didn't reach hot mantle rock, so its floor remains largely as the impact left it. The crater seen lower left is also an ancient one, with a rocky floor made of mantle rock. (Image taken from Figure 16 in the paper.)

A new study published in Icarus examined about 2,800 large highland craters with flat floors and found evidence that strongly suggests volcanic infilling. Molten rock rich in iron and magnesium rose from the Martian mantle to cover the crater floors back when they were young, 3 to 4 billion years ago.

The mechanism that produced the molten rock, concludes the team of scientists led by Christopher Edwards (Caltech), is pressure-release melting, a process that usually operates well inside a planet, not close to its surface.

“Volcanic infilling of craters by decompression melting appears to have occurred only in early Martian history,” the team says. “This was a time when the lithosphere was still relatively thin and the thermal gradient was high.” This placed hot, ready-to-melt material at shallow depths.

The trigger event for melting was the impact itself that made the crater. When the impact blasted away the overlying crust to a depth of several kilometers, the magma emerged from the mantle to partly fill the crater. Hot mantle rock remains solid at high temperatures when kept under pressure. But if something lowers that pressure — such as an impact that removes some overburden — the mantle rock, rich in iron and magnesium, liquifies and flows.

With a similar impact today such a process would probably not happen, the team explains. Over the last several billion years, Mars has cooled enough that suitably hot mantle rock now lies too deep for such crater impacts to reach.

Before arriving at their conclusion, the scientists examined alternative ways to make flat crater floors. These include hardening of sediments and solidifying pools of impact-melted rock. The materials in the rocky-floored craters proved to be too rich in olivine and/or pyroxene — too mafic, in geo-speak — to be sediments washed in or blown in from the surrounding less mafic crust. (In addition, the smooth floors do not show the layering that sediments commonly do.)

“It’s really hard to get more mafic materials concentrated from a less-mafic source,” says Edwards. “It’s much, much easier to go the other way.”

As for impact melt, the scientists explain, “Craters in this diameter range should have central peaks. But the volumes of melt required to completely cover the central peaks would not be generated [by this size impact].” Furthermore, they say, impact melt is rarely restricted to just crater floors — it typically splashes onto crater walls, rims, and surfaces outside the crater.

Only volcanic filling from the mafic mantle matched all the evidence.

“We conclude that the majority of these craters were infilled during either the early Hesperian or late Noachian eras,” the team writes. “The process responsible for infilling these craters likely operated in early Martian history and has not operated over large regions of the planet’s surface since.”

Pressure-release melting, they note, “is a widespread planetary process that has gone previously undocumented.”