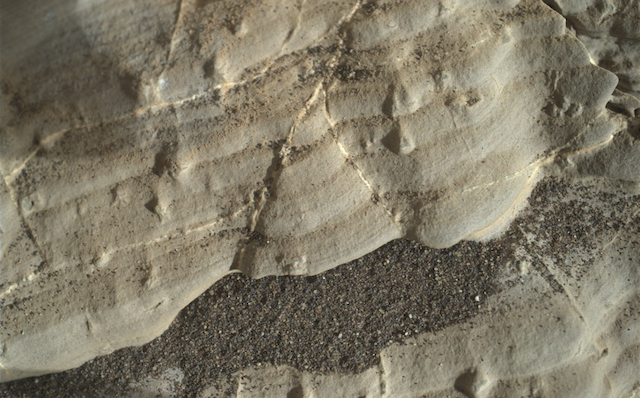 Sol 1931-33, January 11, 2018, update by MSL scientist Mark Salvatore: Curiosity has made it to “Region e” of the Vera Rubin Ridge (VRR) campaign. This location is a slight depression with exposed fractured bedrock that appears more “blue” from orbit than the surrounding region. In addition, the orbital evidence and observations from the ground suggest that this location is similar to “Region 10″ that we visited just last week, which was shown to have some pretty spectacular small-scale features that were of particular interest to many on the science team. As a result, the team was very excited to reach “Region e” and begin our scientific investigation!

During the first day of this plan, Curiosity will focus on acquiring an incredible amount of high-resolution Mast Camera (Mastcam) color images of the area immediately in front of the rover, the “mid-range” region a few meters in front of the rover, and the entirety of Mt. Sharp. This is an anomalous amount of data to collect at a given time, but we are able to do so thanks to the help of the Mars Atmosphere and Volatile Evolution Mission (MAVEN) spacecraft, which will be helping us to downlink those images over… [More at link]