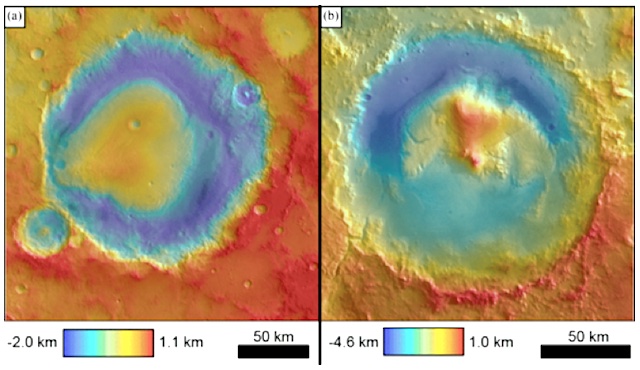 By seeing which way the wind blows, a University of Texas at Dallas fluid dynamics expert has helped propose a solution to a Martian mountain mystery.

Dr. William Anderson, an assistant professor of mechanical engineering in the Erik Jonsson School of Engineering and Computer Science, co-authored a paper published in the journal Physical Review E that explains the common Martian phenomenon of a mountain positioned downwind from the center of an ancient meteorite impact zone.

Anderson’s co-author, Dr. Mackenzie Day, worked on the project as part of her doctoral research at The University of Texas at Austin, where she earned her PhD in geology in May 2017. Day is a postdoctoral scholar at the University of Washington in Seattle.

Gale Crater was formed by meteorite impact early in the history of Mars, and it was subsequently filled with sediments transported by flowing water. This filling preceded massive climate change on the planet, which introduced the arid, dusty conditions that have been prevalent for the past 3.5 billion years. This chronology indicates wind must have played a role in sculpting the mountain.

“On Mars, wind has been the only driver of landscape change for over 3 billion years,” Anderson said. “This makes Mars an ideal planetary laboratory for aeolian morphodynamics — wind-driven movement of sediment and dust. We’re studying how Mars’ swirling atmosphere sculpted its surface.”

Wind vortices blowing across the crater slowly formed a radial moat in the sediment, eventually leaving only the off-center Mount Sharp, a 3-mile-high peak similar in height to the rim of the crater. The mountain was skewed to one side of the crater because the wind excavated one side faster than the other, the research suggests. [More at links]