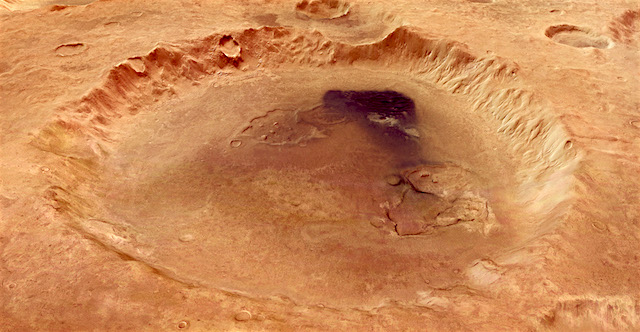 A fascinating martian crater has been chosen to honour the German physicist and planetary scientist, Gerhard Neukum, one of the founders of ESA’s Mars Express mission.

The International Astronomical Union named the 102 km-wide crater in the Noachis Terra region “Neukum” in September last year after the camera’s leader, who died in 2014. Professor Neukum inspired and led the development of the high-resolution stereo camera on Mars Express, which helped to establish the regional geology and topography of Mars.

Observations by the camera in December 2005 and May 2007 were used to create the image mosaic of Neukum Crater presented here.

Neukum Crater sits in the Noachis Terra region in the densely cratered southern highlands of Mars, some 800 km to the west of the planet’s largest impact basin, Hellas. Noachis Terra is one of the oldest known regions on the Red Planet, dating back at least 3.9 billion years – the earliest martian era, the Noachian epoch, is named after it.

It is representative of the ancient surface of Mars, which is characteristically peppered with craters that have been preserved for billions of years, although many have degraded over time. [More at link]