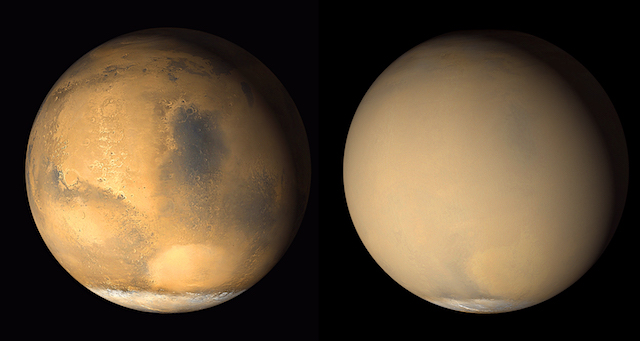 Some Mars experts are eager and optimistic for a dust storm this year to grow so grand it darkens skies around the entire Red Planet.

This biggest type of phenomenon in the environment of modern Mars could be examined as never before possible, using the combination of spacecraft now at Mars.

A study published this week based on observations by NASA’s Mars Reconnaissance Orbiter (MRO) during the most recent Martian global dust storm — in 2007 — suggests such storms play a role in the ongoing process of gas escaping from the top of Mars’ atmosphere. That process long ago transformed wetter, warmer ancient Mars into today’s arid, frozen planet.

“We found there’s an increase in water vapor in the middle atmosphere in connection with dust storms,” said Nicholas Heavens of Hampton University, Hampton, Virginia, lead author of the report in Nature Astronomy. “Water vapor is carried up with the same air mass rising with the dust.”

A link between the presence of water vapor in Mars’ middle atmosphere — roughly 30 to 60 miles (50 to 100 kilometers) high — and escape of hydrogen from the top of the atmosphere has been detected by NASA’s Hubble Space Telescope and the European Space Agency’s Mars Express orbiter, but mainly in years without the dramatic changes produced in a global dust storm. NASA’s MAVEN mission arrived at Mars in 2014 to study the process of atmosphere escape.

“It would be great to have a global dust storm we could observe with all the assets now at Mars, and that could happen this year,” said David Kass of NASA’s Jet Propulsion Laboratory, Pasadena, California. He is a co-author of the new report and deputy principal investigator for the instrument that is the main source of data for it, MRO’s Mars Climate Sounder.

Not all Mars watchers are thrilled with the idea of a global dust storm, which can adversely affect ongoing missions… [More at links]