Trace Gas Orbiter: Aerobraking down, down 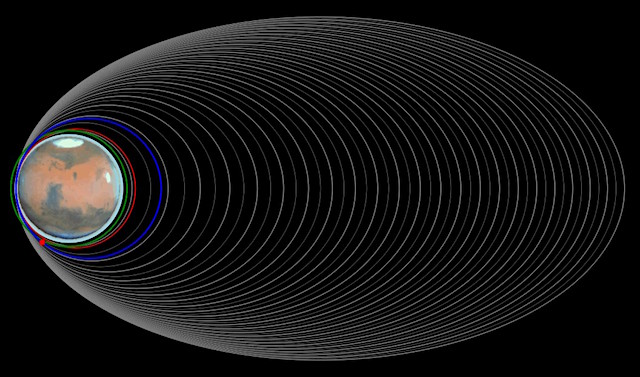 Spacecraft Operations Engineer Armelle Hubault, working on the ExoMars TGO flight control team, reports: This graphic (above) gives a very concise visualisation of the fantastic progress we’ve made with aerobraking to date.

It was coded by my ExoMars TGO colleague Johannes Bauer; the bold grey lines show successive reductions in the ExoMars TGO orbital period by 1 hour; the thin lines by 30 mins.

We started on the biggest orbit with an apocentre (the furthest distance from Mars during each orbit) of 33 200 km and an orbit of 24 hr in March 2017, but had to pause last summer due to Mars being in conjunction.

For comparison, this speed is more than twice as fast as the speed of a typical long-haul jet aircraft.

On Tuesday this week at 15:35 CET, the spacecraft was where the red dot is, coming out of pericentre passage (passing through the point of closest approach over the surface – where Mars’ thin, uppermost atmosphere drags on the craft the most to give the braking effect).

The blue line is the current orbit, which takes only 2 hrs and 48 min and with the apocentre reduced to 2700 km; the red shows the final aerobraking orbit we expect to achieve later in March. Then, we will use the thrusters to manoeuvre the spacecraft into the green orbit (roughly 400 km circular) – the final science and operational data relay orbit.

The image is pretty much to scale… [More at link]