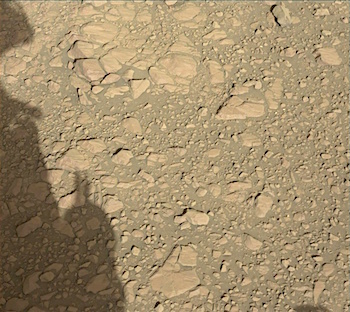 Sol 1954-56, February 2, 2018, update by MSL scientist Abigail Fraeman: Every February 2nd the people of the United States and Canada observe a quirky holiday called Groundhog Day. In the US, the country turns its eyes to Punxsutawney, Pennsylvania to find out whether Punxsutawney Phil, a groundhog, will see his shadow and predict six more weeks of winter. The holiday provides the namesake for a 1993 film in which reporter Phil Conners, brilliantly portrayed by Bill Murray, finds himself in a time loop while covering the events in Punxsutawney.

Planning Curiosity’s activities on Februrary 2nd, 2018, aka sol 1954 – 1956, felt a little bit like Groundhog Day on Mars. Unfortunately the uplink to the rover for the sol 1952 – 1953 failed, so we unexpectedly found ourselves in the same location as Wednesday. The Sol 1953 part of the plan was planned yesterday and uplinked to the rover early this morning. Never wanting to lose missed opportunities, we made a plan today that will recapture the missing Sol 1952 observations we were hoping to get in Wednesday’s plan, and also adds a few new things into the mix given additional time that is available to us. [More at link]