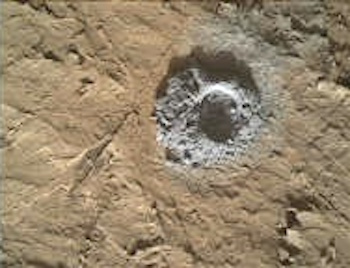 Sol 1979, February 28, 2018, update by MSL scientist Scott Guzewich: It is an exciting time for the Curiosity team. Although the drill was able to create a hole, Mars stubbornly refused to let the drill reach a depth where a rock sample could be collected and has driven Curiosity away from “Lake_Orcadie”.

Attempting to evade the dreaded impenetrably hard bedrock, a group of dedicated scientists and engineers established a new drill target “Lake_Orcadie2″ roughly 7 inches to the right of the first target.

Obsessed with finding a suitable new drill location, Curiosity will thoroughly characterize this new location with APXS and MAHLI after brushing it with the dirt removal tool while also studying the wall and tailings from first drill hole with a ChemCam LIBS raster and Mastcam imaging. [More at link]