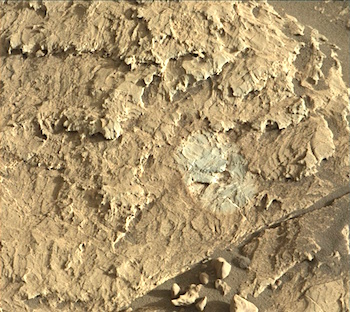 Sols 1981-83, March 2, 2018, update by MSL scientist Ken Herkenhoff: All of the data returned for the second drill target, called “Lake Orcadie 2,” support the decision to attempt to acquire sample at that location using feed-extended drilling. So the weekend plan is focused on drilling, which is planned for the second sol (1982). But first, on Sol 1981, ChemCam and Right Mastcam will observe a potential location for dropping sample in the future and targets named “Ben Nevis” and “Moray.” Mastcam will then measure dust in the atmosphere and Navcam will search for dust devils. Later that afternoon, Right Mastcam will look for changes in the sieved and unsieved Ogunquit Beach dump piles, and the ChemCam RMI and Right Mastcam will acquire mosaics of the alluvial fan near the north rim of Gale Crater. Overnight, APXS will integrate on air rather than surface materials to measure the amount of argon in the atmosphere, which is known to vary seasonally based on Mars Exploration Rover APXS data… [More at link]