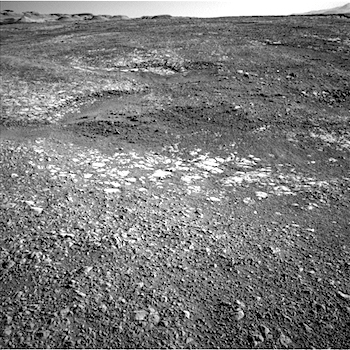 Sol 1988-90, March 12, 2018, update by MSL scientist Ryan Anderson: We found out this morning that in the Sol 1986 plan, ChemCam was marked as “sick” and did not run its sequences. But on the bright side, it’s a repeat of a minor issue that we’ve seen before, and so ChemCam will be back in action in today’s 3-sol plan.

The plan begins on Sol 1988 with a bunch of Mastcam observations. We have stereo mosaics of an area near the target “Golspie” and an area called “Loch Eriboll” that we are scoping out as a potential drill site, as well as a broader context mosaic that covers both areas. Mastcam will also make a multispectral observation in the drive direction. After that, with ChemCam back online, it will analyze the target “North Harris” and Mastcam will take a documentation image. Later in the day, MAHLI will take some pictures of the targets “Barkeval” and “North Harris” and then APXS will do a quick analysis of “Barkeval” and an overnight measurement of “North Harris”. [More at link]