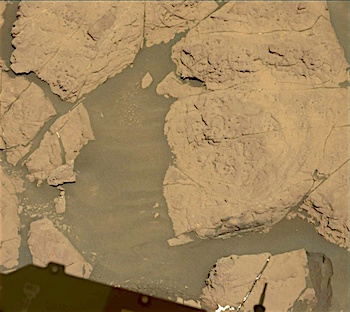 Sol 2001, March 23, 2018, update by MSL scientist Abigail Fraeman: Geology Science Theme Group Leader Prof. Chris House kicked off our planning today by playing a rousing rendition of “Also sprach Zarathustra” over the phone line. Hearing the theme song to the famous movie 2001: A Space Odyssey was the perfect start to sol 2001 planning and inspired us to chose two new target names that were as close to A Space Odyssey as we could get: “Boddam” ((David) Bowman) and “Kirkcudbright” ((Stanley) Kubrick).

Curiosity is currently sitting in front of a steep outcrop that shows some interesting geologic relationships between rocks in the Vera Rubin Ridge. We acquired some great images of these rocks in yestersol’s plan, so today we were focused on understanding the properties of the rocks at our feet. In the first sol of the plan, sol 2001, we will be collecting MAHLI images of a target named “Apin,” and doing DRT, MAHLI, and APXS on a target named “Brora.” [More at link]