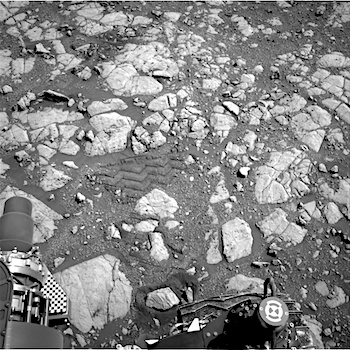 Sol 2004, March 26, 2018, update by MSL scientist Abigail Fraeman: For Sol 2004, Curiosity threw it back to the 2004′s sleeper hit Mean Girls when the rover said, “Stop trying to make ‘drive’ happen.” The weekend drive stopped after just a few meters due to a high current warning from the right middle wheel. We were able to assess all of the drive data this morning and decided there wasn’t any real risk to the vehicle. Instead, we just got unlucky because the combination of a small rock and the rover orientation made the middle wheel work a little harder than normal, and this tripped the limit warning. These things happen occasionally when you are autonomously driving a MINI-cooper sized rover on an entirely different planet! The star of today’s plan will be the drive that was planned for the weekend. We will start by backing up from the area where the weekend drive faulted out, and then continue along our… [More at link]