Curiosity update: Squarely in the red 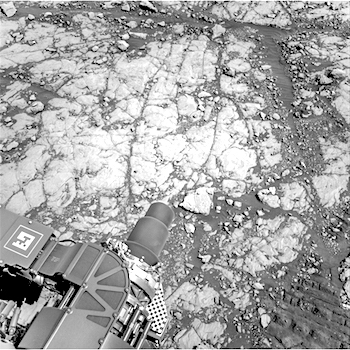 Sol 2005, March 28, 2018, update by MSL scientist Christopher Edwards: After completing a nearly 55m drive, Curiosity found itself sitting right in the middle of the strongest spectral detection of hematite identified along its path up Mt. Sharp. This strong spectral signature is viewed both from orbit, where it was originally identified in Compact Reconnaissance Imaging Spectrometer data, and from the ground in Mastcam multispectral data. While Curiosity has definitely visited some areas that have the spectral fingerprint of hematite in previous sols, this is by far the best example we’ve seen over the mission. The MSL science team is still trying to figure out how this mineral formed and why we’re finding it where we are. Today’s parking spot will likely prove key to unraveling the geologic history of the Vera Rubin Ridge, when combined with other data acquired in Gale Crater. [More at link]