Curiosity update: From Biwabik back to Torridon 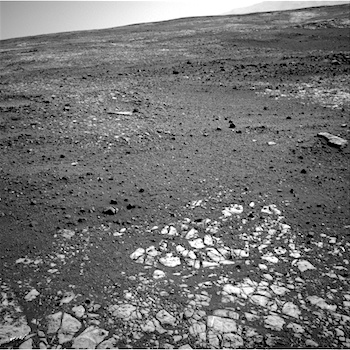 Sol 2013, April 4, 2018, update by MSL scientist Roger Wiens: Factoids: Mars is the only known planet inhabited exclusively by active robots. It has been this way for over fourteen Earth years, with a cumulative total of twenty-six Earth years of roving by four vehicles. Together these rovers have logged over 70 km of distance, well over half of that by the Opportunity rover. (Curiosity will likely hit the 20 km mark later this year).

After a 38 meter drive Curiosity reached the location that the team has called Region 13 of Vera Rubin Ridge. It has been subdivided into separate nearby sites, with the current one as B1, still near the edge of the hematite “hotspot” identified from orbit by CRISM. Curiosity is flirting with the boundary of the mapped “Biwabik” quadrangle; pretty soon we will drive into it for a while and start using target names from northern Minnesota. The Biwabik name was selected because of the city’s connection with the Mesabi Range, which contains large deposits of Precambrian iron ore. For tosol, the rover is back into… [More at link]