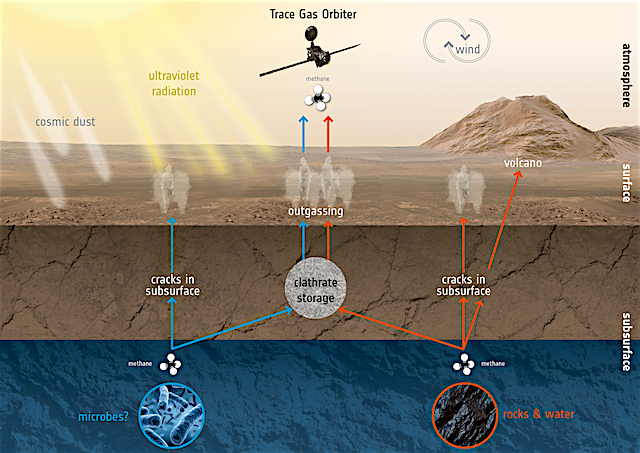 The ExoMars orbiter will soon begin its search for gases that may be linked to active geological or biological activity on the Red Planet.

The Trace Gas Orbiter has reached its final orbit after a year of ‘aerobraking’ that ended in February. This exciting operation saw the craft skimming through the very top of the upper atmosphere, using drag on its solar wings to transform its initial highly elliptical four-day orbit of about 200 × 98,000 km into the final, much lower and near-circular path at about 400 km.

It is now circling Mars every two hours and, after calibration and installation of new software, it will begin routine scientific observations.

“This is a major milestone for our ExoMars programme, and a fantastic achievement for Europe,” says Pia Mitschdoerfer, Trace Gas Orbiter mission manager.

“We have reached this orbit for the first time through aerobraking and with the heaviest orbiter ever sent to the Red Planet, ready to start searching for signs of life from orbit.”

“We will start our science mission in just a couple of weeks and are extremely excited about what the first measurements will reveal,” says Håkan Svedhem, the orbiter’s project scientist.

“We have the sensitivity to detect rare gases in minute proportions, with the potential to discover if Mars is still active today – biologically or geologically speaking.”

The primary goal is to take a detailed inventory of trace gases – those that make up less than 1% of the total volume of the planet’s atmosphere. In particular, the orbiter will seek evidence of methane and other gases that could be signatures of active biological or geological activity. [More at link]