Asteroids from a martian mega-impact? 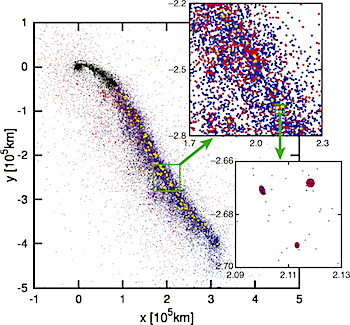 Like evidence left at a crime scene, the mineral olivine may be the clue that helps scientists piece together Mars’s possibly violent history. Could a long-ago giant impact have flung pieces of Mars throughout our inner solar system? Two researchers from the Tokyo Institute of Technology in Japan are on the case.

Olivine is a major component of the Martian upper mantle, making up 60% of this region by weight. Intriguingly, olivine turns up in other places in our solar system too — for instance, in seven out of the nine known Mars Trojans (a group of asteroids of unknown origin that share Mars’s orbit), and in the rare A-type asteroids orbiting in the main asteroid belt.

How did these asteroids form, and why are they so olivine-rich? An interesting explanation has been postulated: perhaps this olivine all came from the same place — Mars — as the result of a mega impact billions of years ago. (…)

To test this theory, we need to determine if a mega impact is capable of producing enough ejecta — and with the appropriate compositions and orbits — to explain the Mars trojans and the A-type asteroids we observe. Tackling this problem, researchers Ryuki Hyodo and Hidenori Genda have performed numerical simulations [published in Astrophysical Journal Letters] to explore the ejecta from such a collision. [More at links]