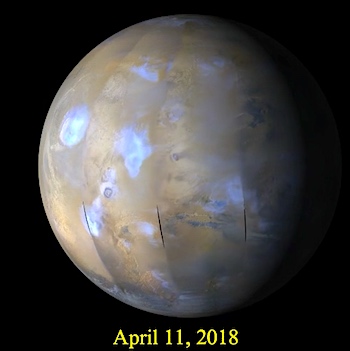 Dust storm activity continued along the seasonal south polar ice cap edge of Mars this past week. Equatorward of the southern seasonal cap edge, local-scale dust storms were observed over Noachis and Cimmeria. At the beginning of the week, a short-lived dust storm was spotted over northwestern Hellas. The northern lowlands were partial obscured by scattered dust and water-ice clouds. Dust clouds, largely from the previous week’s activity continued to spread and abate over Acidalia Planitia. Looking to the tropics and extratropics, dust-lifting activity was sparse apart from some activity over Sinus Sabaeus and Syrtis at the end of the week. Each afternoon… [More at link, including video]