Two CubeSats to go to Mars with InSight 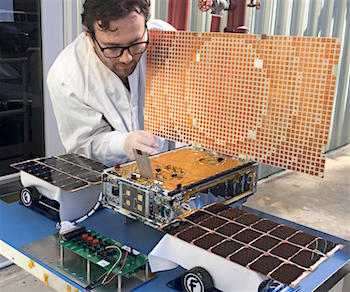 Many of NASA’s most iconic spacecraft towered over the engineers who built them: think Voyagers 1 and 2, Cassini or Galileo — all large machines that could measure up to a school bus. But in the past two decades, mini-satellites called CubeSats have made space accessible to a new generation. These briefcase-sized boxes are more focused in their abilities and have a fraction of the mass — and cost — of some past titans of space.

In May, engineers will be watching closely as NASA launches its first pair of CubeSats designed for deep space. The twin spacecraft are called Mars Cube One, or MarCO, and were built at NASA’s Jet Propulsion Laboratory in Pasadena, California.

Both MarCO spacecraft will be hitching a ride on the same rocket launching InSight, NASA’s next robotic lander headed for Mars. The MarCOs are intended to follow InSight on its cruise through space; if they survive the journey, each is equipped with a folding high-gain antenna to relay data about InSight as it enters the Martian atmosphere and lands.

The MarCOs won’t produce any science of their own, and aren’t required for InSight to send its data back home (the lander will rely on NASA’s Mars orbiters for that, in addition to communicating directly with antennas on Earth). But the twins will be a crucial first test of CubeSat technology beyond Earth orbit, demonstrating how they could be used to further explore the solar system.

“These are our scouts,” said Andy Klesh of JPL, MarCO’s chief engineer. “CubeSats haven’t had to survive the intense radiation of a trip to deep space before, or use propulsion to point their way towards Mars. We hope to blaze that trail.” [More at link]