Curiosity update: A change of season 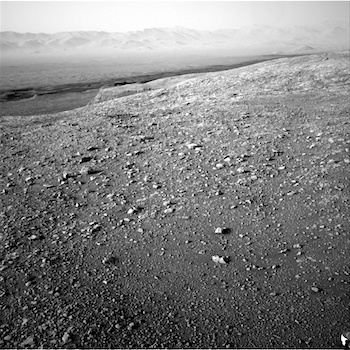 Sols 2027-28, April 20, 2018, update by MSL scientist Scott Guzewich: This was a week of transition for Curiosity’s environmental science team. The cloudy season on Mars has ended as we’ve seen a marked decrease in water ice cloud activity in our Navcam sky movies over the last several weeks and we’re moving quickly into the dusty season on Mars. We will now be drastically reducing the frequency in which we search for clouds and instead focus our attention on dust devils and storms.

The atmosphere is beginning to get dustier, as seen by the hazy look of the northern rim in Gale Crater in this image [above]. Indeed, we began preplanning our annual campaign to study a potential global dust storm, if and when such a storm develops this year. The dusty season on Mars, roughly the second half of the martian year, runs from the end of May until February next year, and we’ll be monitoring closely for the signs that a global dust storm (the last of which occurred way back in 2008!) is developing. [More at link]