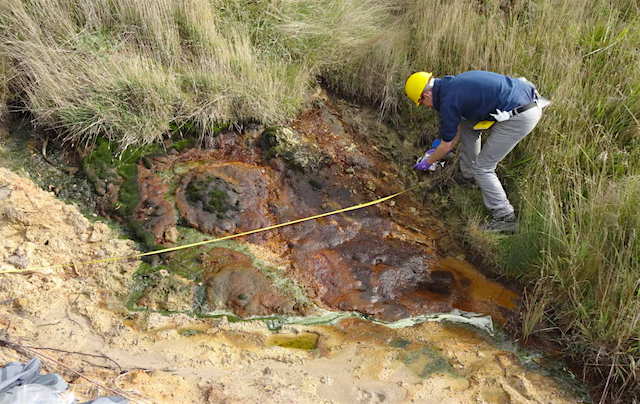 By studying streams on the UK coast, experts have calculated how much organic matter we might find on Mars, and where to look.

Dorset is home to highly acidic sulphur streams that host bacteria that thrive in extreme conditions. One such environment, in St Oswald’s Bay, mimics the conditions on Mars billions of years ago. Now, scientists from Imperial College London have found ancient traces of fatty acids – key building blocks of biological cells – in Dorset’s acidic streams. [The study was published in Nature Scientific Reports.]

Because the environment is so similar to that of Mars during its middle-ages, the findings hint that life might once have existed on the Red Planet.

They found that the Bay’s iron-rich mineral goethite hosts many microbes as well as traces of their fossilised organic remains.

Goethite transforms to haematite – a mineral that’s very common on Mars and gives the planet its red colour. Professor Sephton said: “We thought that if these iron-rich minerals harbour traces of life on Earth, then they might hold clues to past microbial life on the Red Planet.” [More at links]