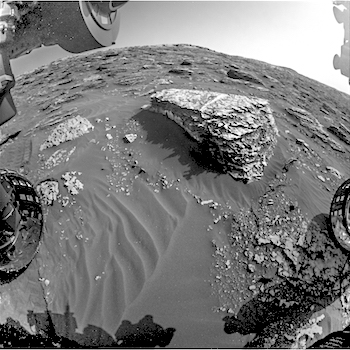 Sol 2055, May 18, 2018, update by MSL scientist Roger Wiens: I was excited to learn earlier this week that my native city was chosen as the name of the latest drill site on Mars! The name was selected by geologists on the mission to recognize the Duluth Complex, one of the largest intrusions of gabbro on Earth, along the north shore of Lake Superior. But, as the team likes one-word names, we are just calling the drill site “Duluth.” The name was almost changed yesterday when it was realized that “Duluth” was already used for a ChemCam target on Sol 292. Normally we don’t use names more than once, but the team decided an exception was warranted.

Duluth, my birth city, was at one time the busiest port in the United States in terms of gross tonnage, surpassing even New York for a while. It is still considered the largest freshwater port in the world even though it is one of the farthest inland, at 3770 km from the Atlantic Ocean. Duluth has one of the coolest climates in the US due to its proximity to the world’s largest and one of the deepest freshwater lakes. The drill target “Duluth” on Mars was also once near the shore of a large freshwater lake. Its climate is also relatively cool, so the name is apropos…. [More at link]