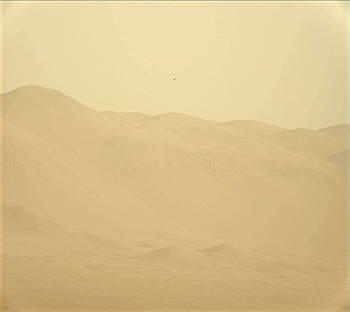 Sols 2068-69, May 31, 2018, update by MSL scientist Claire Newman: We’re looking forward to analyzing some great drill samples from the “Duluth” rock target in Curiosity’s Chemistry and Mineralogy instrument, CheMin. However, previous tests on Mars and the first delivery attempt to CheMin raised a concern that less material than expected may be making it in. To increase the chances of a successful CheMin analysis this time around, three portions will be delivered in Sol 2068 instead of the usual single portion, and from a smaller height than before.

In addition to the CheMin triple delivery, the geology theme group planned some passive imaging of target “Bassett” by ChemCam. This is exposed Murray formation bedrock, so the purpose is to compare its chemical composition with other Murray targets and get a sense of their variability. Also included were Mastcam stereo images of targets “Anderson Lake,” “Bob Lake,” “Toohey Lake,” and “Bass Lake” to better understand the bedding geometry. The GEO theme group also included more Mastcam change detection images… [More at link]