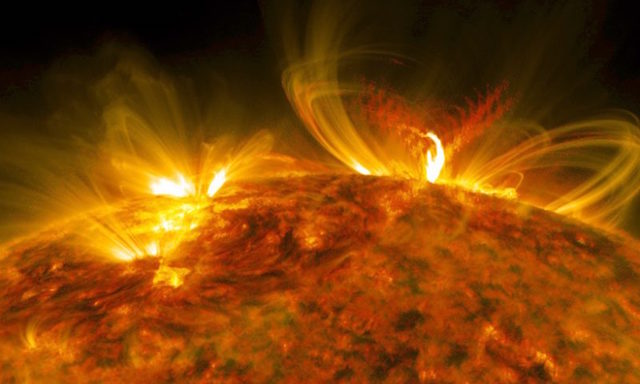 In September 2017, a series of moderate to extreme flares jetted outward from the Sun’s surface. Among them was a monster X8.2 class flare that occurred on 10 September and was one of the largest flares of the current, but nearly completed, 11-year solar cycle. This flare and the other jets generated waves of space weather, auroras, and, at times, communication difficulties here on Earth.

On Mars, the flares had consequences, too, new studies reveal.

Observations made at the Red Planet show that Mars’s upper atmosphere heated unevenly (perhaps because of underlying chemical differences, the study’s authors propose). In areas where the atmosphere heated significantly, additional measurements showed that the top two layers of the upper atmosphere, called the thermosphere and ionosphere, interacted with each other in response to the flare. Because of that, molecular oxygen (O2) escaped to space at a much higher rate than normal… [More at link; see also earlier item on hydrogen loss from the same solar eruption]