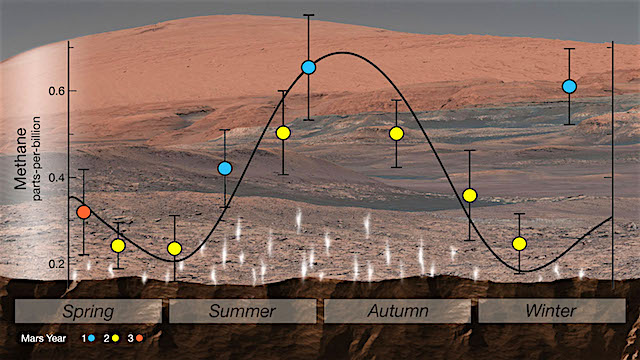 NASA’s Curiosity rover has found new evidence preserved in rocks on Mars that suggests the planet could have supported ancient life, as well as new evidence in the Martian atmosphere that relates to the search for current life on the Red Planet. While not necessarily evidence of life itself, these findings are a good sign for future missions exploring the planet’s surface and subsurface.

The new findings — “tough” organic molecules in 3-billion-year-old sedimentary rocks near the surface, as well as seasonal variations in the levels of methane in the atmosphere — appear in the June 8 edition of the journal Science.

Organic molecules contain carbon and hydrogen, and also may include oxygen, nitrogen and other elements. While commonly associated with life, organic molecules also can be created by non-biological processes and are not necessarily indicators of life.

“With these new findings, Mars is telling us to stay the course and keep searching for evidence of life,” said Thomas Zurbuchen, associate administrator for the Science Mission Directorate at NASA Headquarters, in Washington. “I’m confident that our ongoing and planned missions will unlock even more breathtaking discoveries on the Red Planet.”

“Curiosity has not determined the source of the organic molecules,” said Jen Eigenbrode of NASA’s Goddard Space Flight Center in Greenbelt, Maryland, who is lead author of one of the two new Science papers. “Whether it holds a record of ancient life, was food for life, or has existed in the absence of life, organic matter in Martian materials holds chemical clues to planetary conditions and processes.” (…)

In the second paper, scientists describe the discovery of seasonal variations in methane in the Martian atmosphere over the course of nearly three Mars years, which is almost six Earth years. This variation was detected by Curiosity’s Sample Analysis at Mars (SAM) instrument suite. (…)

“This is the first time we’ve seen something repeatable in the methane story, so it offers us a handle in understanding it,” said Chris Webster of NASA’s Jet Propulsion Laboratory in Pasadena, California, lead author of the second paper. “This is all possible because of Curiosity’s longevity. The long duration has allowed us to see the patterns in this seasonal ‘breathing.’” [More at links]