Medusae Fossae formation is likely a deposit from explosive volcanism 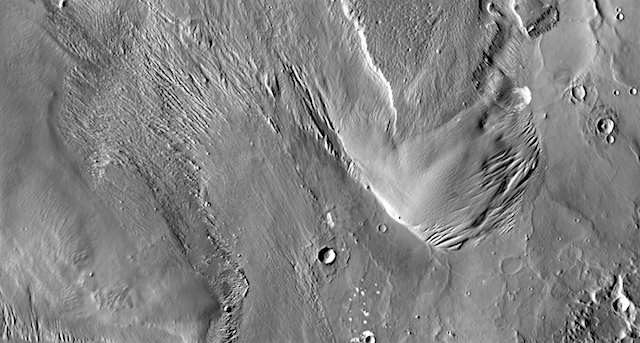 [Editor’s note: From a paper by Lujendra Ojha and Kevin Lewis recently published in the Journal of Geophysical Research.]

The Medusae Fossae Formation is one of the largest sedimentary deposits on Mars. Its origin is uncertain, though several processes including volcanic, eolian, and ice-related mechanisms have been proposed in its formation.

Here we localize the gravity and topography signature of the formation and place the first direct constraint on its density. We find that it is a relatively porous unit with a bulk density of 1.765. When combined with previous radar measurements, our density constraint rules out the presence of ice as the cause of unusual radar permittivity.

Rather, we find the joint radar and gravity constraints imply a dry and highly porous rock unit. Based on the relatively low density, lack of ice, and the previously known enrichment of volatile elements associated with volcanic emissions (chlorine and sulfur), we propose that the Medusae Fossae formation was deposited by pyroclastic eruptions.

Using our density estimate, the mass of the formation is found to be two orders of magnitude greater than the largest terrestrial pyroclastic deposit, making it the largest known pyroclastic deposit in the solar system. Outgassing of volatiles such as CO2 and H2O from the formation would have substantially contributed to the Martian atmosphere and hydrosphere. [More at link]