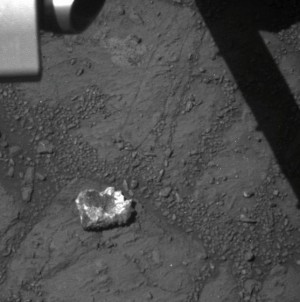 On sol 3551 (January 19, 2014) Mars Exploration Rover Opportunity used its Panoramic Camera to image in several wavelengths the “donut rock” — dubbed Pinnacle Island by the science team — that appeared near the rover sometime before it was first noticed on sol 3540 (January 8, 2014). According to the press release from Jet Propulsion Laboratory, “Much of the rock is bright-toned, nearly white. A portion is deep red in color. Pinnacle Island may have been flipped upside down when a wheel dislodged it, providing an unusual circumstance for examining the underside of a Martian rock. The site is on Murray Ridge, a section of the rim of Endeavour Crater where Opportunity is working on north-facing slopes during the rover’s sixth Martian winter.”